Icom Inc. has published firmware update E3 for the IC-7100 on their global website. This new firmware has been designed to improve RX audio quality.

The following firmware have been updated:

The new firmware can be downloaded here.

When it comes to keeping track of Baofeng / Pofung flaws, the Miklor page is way ahead of me. I only run into newer models by accident, but don’t order them anymore. It’s just too expensive.

The latest UV-5R bug pointed out by John K3NXU involves muted RX audio when the keyboard beep is switched off. Personally I find keyboard beeps very annoying, and always switch it off. No new model for me, that’s for sure…

It’s a bit of a silly bug, created by a sloppy programmer, and never caught by other Baofeng employees responsible for intercepting these things – if such employees actually exist. Let’s face it: the UV-5R is a dirt cheap product, having competent QA personnel on the payroll might not be feasible.

Not the first time
Since its inception the UV-5R had its fair share of bugs, from being off-frequency on receive to muffled TX audio to meaningless squelch levels. Under ideal circumstances bugs wouldn’t be a problem: just update the firmware and you’re fine. Unfortunately this can’t be done: UV-5R firmware can’t be updated afterwards.

If you can’t live with the bug, the only thing you can do is send it back or wait for a new version to come to market. If you bought directly from China, sending back the radio is often more expensive than buying a new one. Basically you’re screwed. Food for thought if you love conspiracy theories: Baofeng does it on purpose! 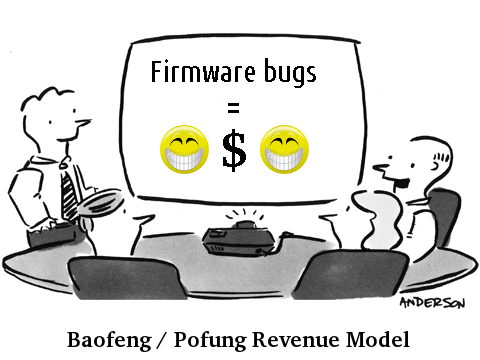 My second Baofeng UV-5R arrived. As expected, this one is loaded with new firmware.

As you can see, the data we thought to be a combination of production date plus the number of UV-5R’s produced that day, are identical. It appears that the UV-5R’s aren’t serialized in such a way at all, which makes retrieving this information pointless from now on. The printed serial numbers on the back of the HT do differ though.

Both are black versions and bought from 409shop. This shop uses more than one name on eBay, such as RadioBanker and HK360Radio.

Batteries still do not have the CE mark. The CE mark is totally unimportant when it comes to quality, but there is a slight possibility that the batteries will be refused at the border of EU countries.

Things that should have changed but didn’t:

The ‘Not Confirmed’ Dept:

Some owners of earlier UV-5R’s complained about the receiver being off frequency, and some state that the new version does a better job. Mine wasn’t off frequency, and the new one isn’t either. I don’t say that these people were imagining things, only that I could not confirm this. There’s always the possibility of getting a lemon.

I’ve read tips from owners that by choosing 2.5KHz channel spacing, and checking the frequencies below and above a busy frequency, could give you an indication whether the UV-5R is off frequency or not. I disagree. If I do the same with a Kenwood TMV-71 or Yaesu FT-8900R, I find the same differences. These differences are more likely caused by the non-symmetrical shape of the (often cheap) filters commonly used in these radios. Try it.