Today I went to my friend Tom PA2TSL, who owns a complete man cave filled with top-of-the-line test equipment. After a complete charge, the UV-5R was connected to the HP 8590A spectrum analyzer, combined with a 30dB attenuator, the HP 8498A.

PA2TSL while testing the sensitivity of the UV-5R.

Harmonic suppression
The Baofeng UV-3R confronted us with something we didn’t want: spurious emissions. Some HAM operators argued that this was no big deal, given the low power output and small antennas. My opinion is that, regardless of antenna’s and the way we’re supposed to use it, a transmitter should be clean. Again, the UV-5R showed that Baofeng learned something from the past. Below are pictures of the measurements. 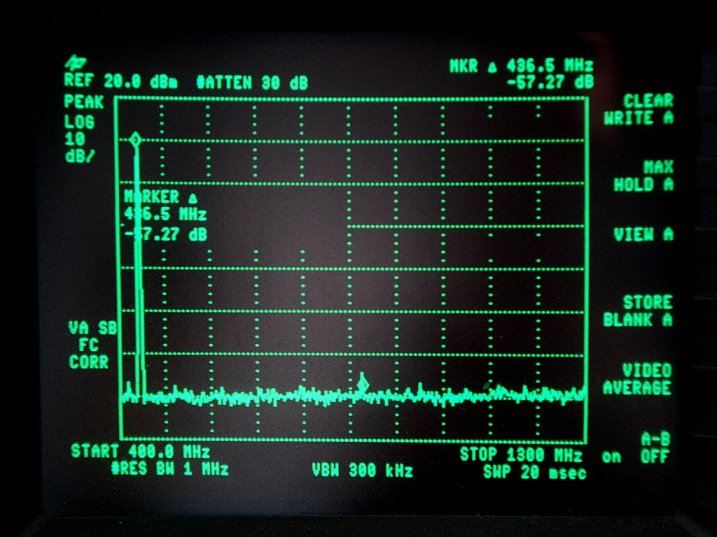 Sensitivity & selectivity part II
My first impression was that the sensitivity was on par with the big names. The numbers confirm this. On VHF, 145MHz, the Baofeng UV-5R started to pick up signals at -129dBm. On UHF, 435MHz, the receiver came to life at -126dBm.

When it comes to selectivity, the (positive) differences with the old UV-3R are impossible to miss. When connected to an outdoor antenna however, the receiver will collapse quickly. We discussed this finding for a moment and concluded that this is unfortunate, but hardly important. A handheld is a handheld, not a replacement for an expensive dual band transceiver.

There’s a rumor floating around that the receiver of the Baofeng UV-5R is off frequency. We could not confirm this; both transmitter and receiver were spot on. Tom’s equipment even added a few extra digits to my measurements, but we all we could find was a meager difference of 44Hz. Please keep in mind that we’re talking FM here!

Other findings
The S-meter isn’t one. Full deflection all the time, regardless of the signal strength. At best it’s a visual confirmation of the squelch being opened. Oh well, I never look at them anyway. The manual isn’t one either. Prepare for some frustrations.

Conclusion
Yes, there are some flaws to report, but these aren’t deal breakers. Knowing the Chinese manufacturers (they listen!), these will probably be fixed in later versions. More flaws will surface along the way, no doubt about that. All said and done, I must say that I like the UV-5R a lot, especially with the price (around $55) in mind. A keeper for sure, and I think I’ll order a few spare batteries today. These won’t break the bank either.