This is a preview and not a definitive review; the sample I got is just a snapshot of a product under development. This means that features, bugs and test data can change. All you’ll get is a basic idea of what to expect. Many thanks go to K-PO, the company that sent me this sample.

The radio didn’t come with a manual, so I tried to figure out the menus by trial and error.

Dubbed to become the successor of the AT-5555, I wondered if some flaws were fixed, or about to be fixed. When I reviewed the Superstar 6900N, which I still own and use, I ran into a few problems. The most prominent one was the presence of unwanted mixer products up and down the carrier.

CRT France, apparently very annoyed by my findings, refused to send a service manual. This ruled out the possibility of finding the cause, let alone a fix.

Last flaw: 5 KHz steps are too coarse for amateur use.

“Export Radio”
The AT-6666 is one of many so-called export radios. An export radio is basically a CB transceiver that can’t be sold legally in most countries. Either the power output is too high, the frequency range is too wide, or some modes aren’t allowed. In most cases all of the above applies.

The trick some manufacturers use is to initially limit the frequency range to 28.000 – 29.700 MHz and advertise these radios as ham radio transceivers. Suddenly these radios are legal to sell, because ham radio operators may use any mode and generally don’t have to worry about power output restrictions.

The catch: without exception it is very easy to modify these transceivers and change them into an (illegal) CB radio.

First impressions
The first thing I noticed is that this radio looks more like ham radio equipment than previous models. The ‘old’ Anytone AT-5555 and all its identical twins can be recognized as CB radios from miles away, but this model could fool you.

The AT-6666 is a small radio: 24.6mm x 15.7mm x 4.8mm  (depth x width x height, heat sink and knobs included). The microphone is simple but ergonomic with Up and Down buttons located on top.

The LCD background color is selectable, something I like a lot. 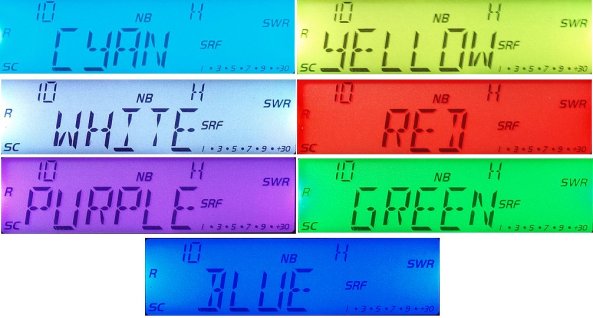 AT-6666 Inside
If this is a beta version, it doesn’t show. This is a nice PCB, neatly built. 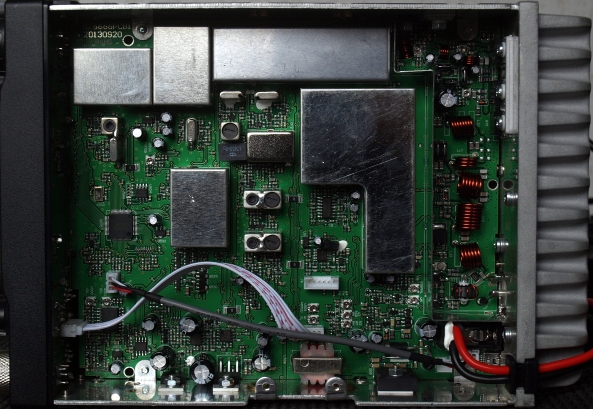 RF power is generated by four 13N10 Power MOS FETS (download specs here). Three are mounted at the back, one at the left. 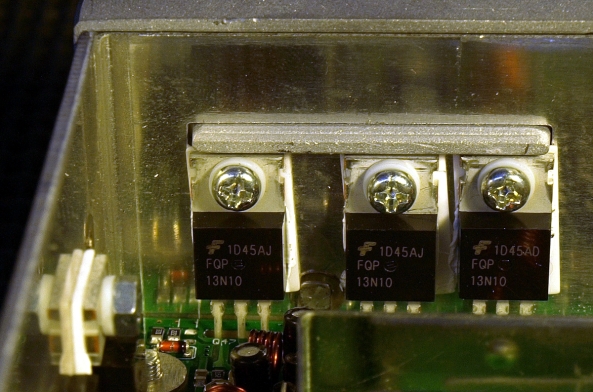 Harmonics, Phase Noise and Mixer Products
Whatever Anytone did they did right: the strange, unwanted mixer products are gone, and harmonic suppression is excellent. There’s no phase noise of any importance present, which is a sign of a stable oscillator. 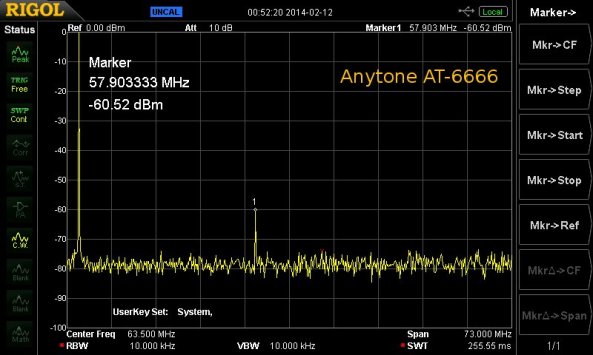 With a harmonic suppression better than 60 dBm, this Anytone joins the ranks of the best. 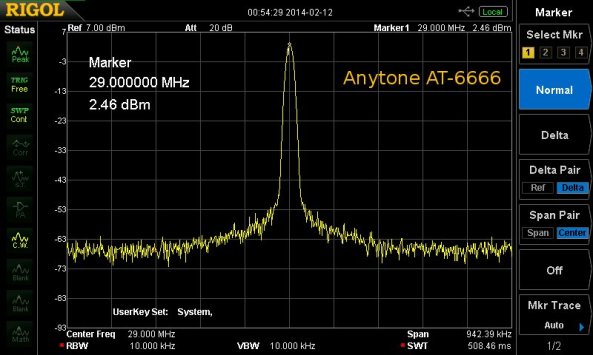 Frequency accuracy
At the highest resolution of the counter I measured a difference of +5Hz. Such a small difference is completely irrelevant.

Not quite at the promised levels yet. Don’t forget that this is a preview sample.

Menus
The menus are divided in two parts. One is hidden under the menu button, the other under the channel selector. The menus pop up when you press these keys for about one second.

The front panel of the radio is more or less self explaining. You have an on/off/volume knob and adjustable RF power, RF Gain, Clarifier and Squelch pots. At the back we find a micro USB connector, so there’s no need to open up the radio in order to program it.

On the air
The first thing I noticed is that the quality of the modulation improved. The AT-5555 / Superstar isn’t bad, but a bit on the tinny side. This radio sounds more like my Yaesu FT-900. I could work what I heard, and in the end that’s all that counts. Sensitivity is fine and on par with the previous models.

The verdict
For a beta version there are surprisingly few flaws to be found. Almost all of my gripes were addressed; the AT-6666 is what the AT-5555 should have been, or what I hoped it would be.

There are still a few things on my mind: