After reviewing Wouxun’s mobile transceiver, which still needed some work, all attention shifted towards the Anytone AT-588UV (now changed to AT-5888UV). I’m not the first to express my feelings about this rig, nor will I be the last. I took my time to review this mobile radio, as early reports contradict each other in almost every respect. When opinions vary from ‘Piece of junk’ to ‘Best radio ever’, I tread more carefully than usual.

First impressions
The Anytone AT-588UV is a good looking mobile rig. The front panel is detachable for mobile use. Eight direct access keys are placed just under the LCD. The readability of the typeface used to describe their function is excellent, even from a distance. Display color is highly configurable, thanks to the implemented RGB color system. An insanely loud beep, enough to scare the living daylights out of you, is heard when you switch on the radio. This can’t be changed. 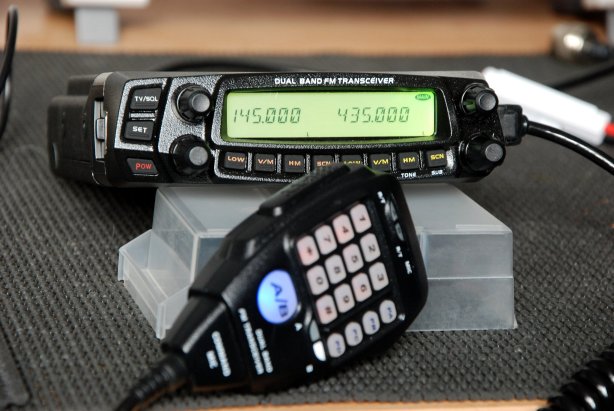 The microphone connector (RJ45) is located at the right, a USB connector at the left. This connector isn’t there to program the Anytone by computer, as you might expect, but only to charge your phone, MP3 player or similar device. Programming is possible with an optional cable which has to plugged into the microphone input. At the back there are two outputs, one marked external speaker and one marked A/V. Because both accept the same 3.5mm plugs, it’s easy to make mistakes. I made a few mistakes on purpose, but not harm is done when you mess up. The antenna connector used is an old fashioned SO-239, not N.

When seen from above, this Anytone looks similar to the Alinco DR-635, up to the position of the internal speaker and cooling fan. The fan of the Anytone only kicks in when needed. Nice.

At first glance the supplied multi-functional microphone is one we would like to see standard on every rig, but there’s a catch. Instead of putting the up- and down buttons on top, where they belong, they’re located at the top right – exactly in the place where your thumb rests when holding the microphone. The lack of a ‘lock’ switch adds to the misery. Rumors are that new batches of the AT-588UV will be delivered with another (usable) microphone model.

The external speaker connector is unreliable. The only way to make it work is by inserting the 3.5mm plug firmly and pull it out slightly. One wrong move, one little tremble, and the audio goes dead. Probably easy to fix, but sloppy nonetheless.

Menus
The menus look very similar to the ones we know from Yaesu. Personally I don’t mind; Yaesu menus are relatively easy to work with once you understand the logic behind them. There are some options there you won’t see elsewhere. A two/five tone generator is one of them, AM detection up to 174 MHz is another. AM detection can be set to automatic or manual. The last option will allow you to listen to AM transmissions on 2 meters, not only air traffic.

Receiver
Sensitivity on both bands is fine, between -124dBm on UHF and -127dBm on VHF. I had really low expectations when I started to look at the quality of the front end. VA3ISP reported that he heard pager blasts while listening to the amateur bands, but I couldn’t replicate such problems. On the contrary, the receiver of the AT-588UV performed better than average when it came to handling unwanted and strong out-of-band signals.

RX Audio
RX audio is not very pleasant to listen to. There’s such an amount of distortion that’s is not something which is only measurable, but clearly audible. The audio amplifier also spits out a generous amount of noise, even when the volume is turned down to a minimum. On top of all this there’s an annoying high pitched tone present when the squelch opens. My frequency counter, DSO, nor spectrum analyzer were able to isolate the frequency due to the reported noise and distortion. I eventually managed to pinpoint the frequency by tuning my function generator until both tones were zero beat. I ended up at 4000Hz, give or take a few Hz.

Transmitter
My review sample suffered from a flaw which has the same effect as a broken microphone wire: sometimes your modulation is fine, sometimes it’s gone almost completely. To make sure it really wasn’t a problem with the microphone, I replaced it by another microphone which belongs to my Anytone 70MHz transceiver. The problem didn’t go away. Contrary to other reports there seems to be no relation to the input level – it doesn’t matter whether I whisper or yell. When it works, TX audio quality is great though. 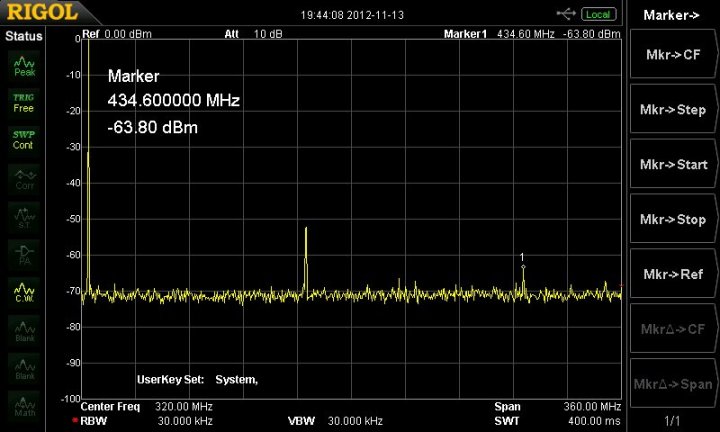 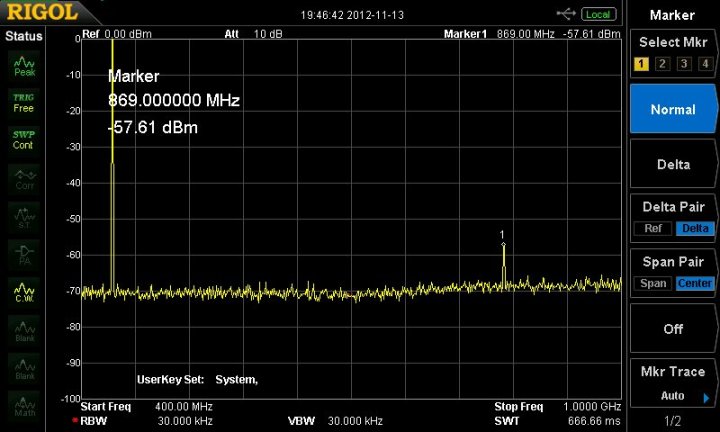 Conclusion
The Anytone AT-588UV is far from perfect. The rig is plagued by design flaws which all have to be sorted out by the manufacturer if they want to have any chance of impressing the ham radio world.

If I may be blunt: many flaws are impossible to live with. If I transmit, I want to be heard. If I listen, I don’t want to be annoyed by noise, distortion and high pitched tones. If this annoys a 57 years old guy who even can’t hear the complete audio spectrum anymore, I wonder how younger operators would think about this.

Then there’s build quality, which is only average. I’ve spotted coils which weren’t soldered properly, causing one end of the coil to hang one micron above PCB ground. There are PCB connectors which aren’t aligned neatly. The external speaker output is unreliable. You can’t get away with this, not even when it’s compensated by a rock bottom price.

Bottom line: good ideas, poor execution. I’m sure the manufacturer can fix the rig, but it will take time. If I would like to own a Chinese mobile radio, I’d rather put my money in an improved version of the Wouxun KG-UV920R.