Those of you who are RSGB members will no doubt have seen the review of the Wouxun KV-UG950P quad band FM mobile rig a couple of months back. It covered 70cm/2/6/10m, as per a number of other quad band mobile rigs. What may have passed un-noticed though was a mention on the Martin Lynch website of a different version of that rig (suffix PL), covering 70cm/2/6/4m.

Not expected to arrive until late October. I initially thought this would be a 3rd-party rework, swapping 10m for 4m but it turns out that MLS commissioned a custom version to be made in the Wouxun factory. The replacement of 10m by 4m seemed a far better ‘fit’ for the UK market to me so I decided to pre-order one & it arrived yesterday afternoon. I was wary buying ‘sight unseen’ but I’m really pleased with it. 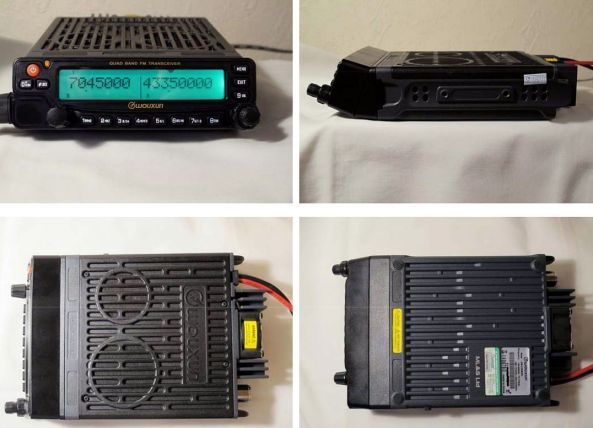 First impressions are very good. A few of the menu options (those which won’t be used by amateurs) indicate its ancestry in the professional PMR market which is probably why it is ‘built like a brick privy’. The whole case is basically one big heatsink. On 4/6/2m it will run 50w, reducing to 40w on 70cm. The front panel is removable (separation cable supplied) and is able to be attached either horizontally, or angled slightly up or down. In addition to the internal speaker there is a speaker built into the mic (for very noisy environments) and the option for separate external speakers for each ‘side’ of the rig. It is effectively two rigs in one. A mobile mounting bracket is supplied too.

Transmitter
I fired it up on 4m and a local came straight back with “you’ve got a new rig. Sounds much better than the PMR box”, which was encouraging. The supplied manual is actually for the version with 10m at the moment, but read 70MHz for 28MHz and you’ll be fine. The display has several colour options. As supplied it was set up to use a different colour for receive, busy channel, and transmit, which drove me nuts so I changed it to green for everything. Initially I found myself drowning in options/settings but an hour or so later I’d got it the way I liked it. A real surprise was finding it covered the FM broadcast band (rx only) which I didn’t see in the spec & discovered by accident.

The manual is functional, rather than polished, but all the info is in there. The menu tree is as extensive as similar rigs by the other makers & will take a while to get used to. A dealer persuading a maker to produce a customized batch of a rig is a new development in the amateur market. If the USA had not failed in their recent attempt to get a 70MHz allocation this custom rig may well have been the regular one. The build quality indicates some of the Chinese makers are getting their quality control act together….although some/all of the ‘big three’ allegedly have some Chinese builders.

Duplexers
You’ll need to be careful choosing duplexers with this rig as most swap HF/UHF at around 65 MHz, but there is a COMET one that swaps at 95MHz. The 600w rating is ‘ambitious’ but good enough for this rig. Ive not detected any noticeable power loss on throughput, or leaking from one port to the other. I have an x200 for 2/70, and a separate 4m vet. Not using 6m yet as I have the ts590 for that.

Receiver
I’m still pleased with the Wouxun (pronounced ooh-shun, according to Martin Lynch & sons). Receiver is much better than the old PMR set I had on 4m. I’m told its far better than the Anytone 4m FM rig too, and I reckon slightly ahead of the IC7100 on 4m. I’ve played with the programming software, which is very basic. Its a good job it is free. I’d describe it as an ‘early alpha’ release.

In short
It works but …. there seems to be a slight ‘latency’ switching from transmit to receive, and back, which may be an issue for some. I think this is down to the switching delay (100mS) allowed for ctss and dsc tones which you can increase, but not turn off completely. Whatever the reason it is more noticeable on 70MHz band for some reason.

Volume controls are not pots, but stepped digital increases.

Interesting news Tim G4VXE picked up is that both Wouxun and TYT will be offering a version of their quad-band mobiles which will include 70MHz (source: amateurradio.com). The Wouxun KG-UV950PL is already available and listed on the website of Martin Lynch & Sons Ltd (link). The price is £249.99 (including 20% VAT). According to the specs the output on 4 meters is 50 Watts, FM only.

Still in beta, but might be interesting for the European market. A company called “Noble Radio” (link) is developing a dual-band SSB/CW transceiver for 4 and 6 meters. Price point unknown at this time.

Selectivity:
500 Hz to 4 kHz adjustable with the SCAF filters
Ultimate attenuation of filters are 55db or better

SCAF Filters can be used to tailor SSB Transmit audio.

Well, that’s the way I look at it now. I listened in to the sparse activities in PA land for a while, using a Yaesu VR-5000 connected to a Diamond discone. Not the best receiver ever, nor the best antenna, but adequate to get an impression of the behavior of this band.

The rather pathetic performance of this setup started to annoy me quickly though. I picked up a Wouxun KG-816 (sorry, no plans for a in-depth review, unless readers are interested), which does a much better job than the Yaesu. Now I’m in the process of constructing a better antenna. Material salvaged from an old CB antenna is used for that. If all goes well, these remains will be converted to a 5/8 wave vertical for 4 meters.

So far it seems to be a nice band, especially for local QSO’s. Besides the locals I picked up some activity from Spain an Italy also, mostly in SSB. The Wouxun is FM only, but hey, you can’t have everything.