Ham radio? Dangerous! Radiation! A word which, when used out of context, is linked to something scary like Chernobyl.

Darc.de (link, Google Translate), reported that 120 citizens of Rossbach, a small place in Bavaria, signed a petition with the sole purpose of banning ham radio. The petition was handed over to the city council on July 15. The reason: emissions from ham radio are supposed to be dangerous to their health. In their cross-hairs: Joachim DF3FF.

One citizen, Berthold Richter, wrote a letter to the local newspaper (link). 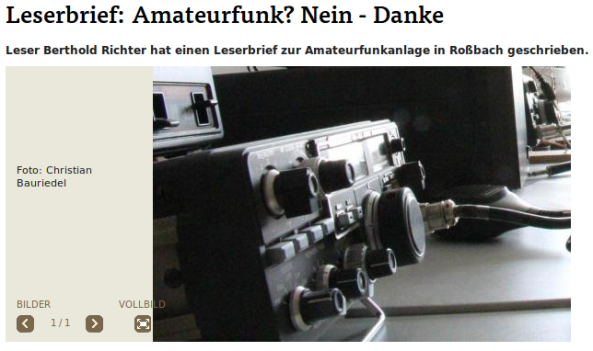 Translated to the best of my abilities it says:

Ham Radio? No Thanks!
I’ve always thought “A little more radiation, would it really matter? After all, by using DECT wireless phones, WiFi and cell phones I have radiation in my own house anyway.

After some calculations the conclusion was that at legal maximum output, the radiation (caused by the ham radio signal) is equivalent to 200 mobile phones in UMTS mode. At half the limit it is still as much as 100 mobile phones. That is not a little bit, but much more than everything together I have in the house itself.

Would you want that? And I’m not even mentioning the unsightly antennas. All interference to radio or television reception come from the ham radio operator, but because all limits are adhered to, you can not do anything. “You have to live with it or purchase new equipment,” – says the Agency.

We do not need ham radio in residential areas and do not want it either. Not at all – not even a little bit.

The letter above was a reaction to the fact that federal agencies, including the German Department of Health, expressed that such a ban is:

The Dutch (non-negotiable) ruling is as follows:

Joachim DF3FF will be relocated to a residence of his choosing; all costs and expenses will be paid for by the complainers.