My initial review of the original Baofeng UV-5R has been a while ago. Two problems (lowest possible volume and being off-frequency on RX) were fixed starting firmware versions 2.51 and up. After that nothing much changed — except for how the radio looked like.

To be honest, all subsequent incarnations of the UV-5R were as exciting to talk about as the latest episode of My Little Pony.

Then the Baofeng GT-3 appeared. I sighed, shrugged, scratched my behind and posted something about it, but I didn’t believe much of the Baofeng sales pitch. “This is The One!” for example is a bold statement, it sounded like Morpheus expressing his faith in Neo. In the end Neo proved to be The One, but hey, The Matrix was science fiction. The GT-3 is for real. 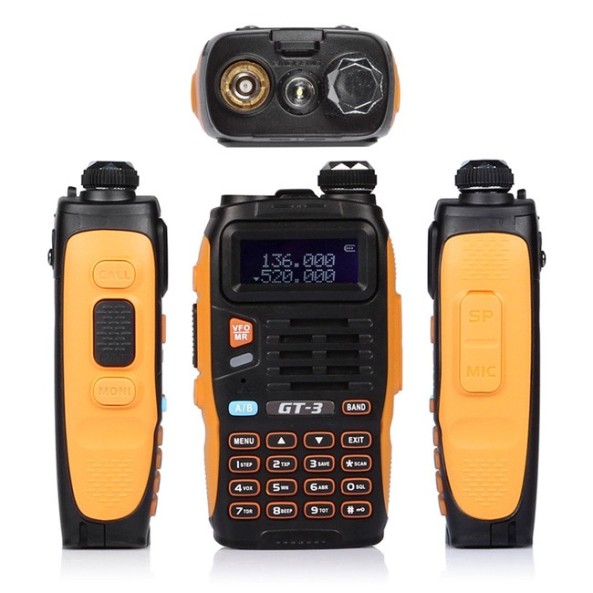 Yet there were some indications that I needed to take this radio more serious. Early buyers reported that TX audio was much better, sensitivity improved, and squelch levels finally meant something. I arranged a review sample to compare the GT-3 to the UV-5R’s I own.

Nothing much changed
I said that nothing much changed in the UV-5R world, but I forgot to mention one thing: TX audio quality. Later UV-5R versions didn’t sound as good as the early versions, TX audio became muffled and lacked sufficient punch. The problem annoyed a few hams to such an extent that they came up with all kinds of modifications, like using the VOX circuit to give the microphone signal a bit of a boost.

The Baofeng UV-B5/B6 did away with all these issues: this model delivers bright, clear and loud audio. A decent front-end, capable of coping with most unwanted out-of-band signals, was the cherry on the cake.

The Baofeng UV-82, a radio build around UV-5R circuitry and firmware, brought back quality TX audio too. One Watt of extra output power on both bands was a bonus. Even if the GT-3 would sound as good as the UV-B5 or UV-82, we’ve gained nothing. Let’s face it: TX audio was good. It got worse. If Baofeng fixed it we’re back where we started, nothing more.

Look & Feel
The Baofeng GT-3 looks good, but it’s always a matter of taste. The battery came fully charged out of the box. A quick tour through the menus showed that nothing much changed here either. While the shape of the the original UV-5R looks a bit like a kindergarten Lego project, the GT-3’s shape is more refined and much more comfortable to hold.

First Impressions
After a full reset and setting all parameters to my liking, I took the GT-3 for a spin while walking the dogs. I couldn’t notice much of a difference. I realized that I really had to take both radios with me, and fit both with exactly the same antenna. I selected the (much better) UV-B5 stock antenna and did the test once again. I still couldn’t notice any difference between the two radios.

TX Audio
We’re back where we once started: TX audio is fine again. No need for mods.

LCD
The fancy inverse LCD is something to get used to. Like other owners reported already, this LCD may be fashionable but doesn’t offer the best readability. If the backlight goes out, it’s hard to make out the working frequency. The LCD is still prone to overheating, but to a lesser extent. Instead of a blackout you now will experience a whiteout.

Antenna
The stock antenna is one to throw into the bin. Not only does it perform poorly, it also heats up quickly. When replaced by the Baofeng UV-B5 antenna the radio comes to life, especially on VHF.

Not much of a difference; the GT-3 is marginally more sensitive on UHF.

The GT-3 does a better job on both bands. On the old UV-5R squelch levels meant absolutely nothing on VHF, while the GT-3 creates a difference of 7 dBm between level 1 and 9. It’s still a far cry from what I would like to see, but at least it is an improvement. On UHF the differences are smaller.

Harmonic suppression
Harmonic suppression is a mixed bag. On VHF it’s a bit disappointing with only -53 dBm for the second harmonics, and it gets worse when we look at the third (-47 dBm) and fourth (-35 dBm) harmonic. Even a fifth and sixth harmonic are visible! The old UV-5R did a much better job.

On UHF the second harmonic is perfectly suppressed, at -43 dBm the third harmonic is disappointing once again.

Other notes
Apart from antennas and speaker microphones, no UV-5R accessory is compatible with the GT-3. This is something to think over before you buy one of these. Apart from spare batteries there aren’t any accessories available yet.

In the menu the backlight time-out can now be set to 10 instead of 5 seconds. Unfortunately it doesn’t work; five seconds is the maximum. Pity, this display could really use that.

The manual is an improvement over the UV-5R, but still very basic.

Contrary to other reports you can charge the radio while the belt clip is attached. There’s about an inch of clearance between the belt clip and the charger.

The verdict
The Baofeng GT-3 could not really convince me. A few things got better (squelch levels), other things suffered (harmonic suppression). The poor stock antenna is unforgivable; at this price you’re entitled to get the best. The lack of accessories doesn’t help either.

The price is stiff. You can have one UV-5R with a bag full of accessories, big batteries and what not for the price of one GT-3, and you probably will still keep some money in your pocket.  All in all I have difficulties recommending this radio at the current price — there are better performing radios out there which cost about the same, like the Quansheng TG-UV2. That said, I really like the fresh look.