Rumors about a quad-band made by Wouxun were floating on the Internet for quite a while. Fortunately Wouxun didn’t promise anything light-years in advance this time – not many will have forgotten the KG-UV920R media frenzy years ago.

Look & Feel
The KG-UV950P looks almost identical to its dual-band sibling. The microphone is completely redesigned though, and the microphone connector at the front moved to the left side of the rig. Apart from that they’re difficult to tell apart.

At the back we find the two speaker outputs and one SO-239 antenna connector. Just like with the Yaesu FT-8900R you need to figure out yourself how to construct an antenna system suitable for use on all four bands. As far as I know the Comet UHV-4 and the Diamond CR8900 are the only antennas in existence, but both are specifically designed for mobile use.

For a base station setup isn’t too hard to construct one yourself. Four resonant dipoles, one for each band, all ending up in one feed point, would be worth considering. Nested dipoles are a common and reliable system often used for working the HF bands. Assuming you did everything right, this kind of multi-band antenna system doesn’t require a tuner.

But, first things first: let’s show some pictures. Click on the images for a larger version. 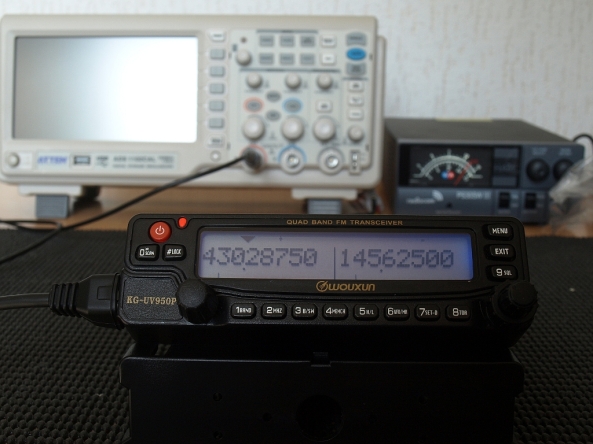 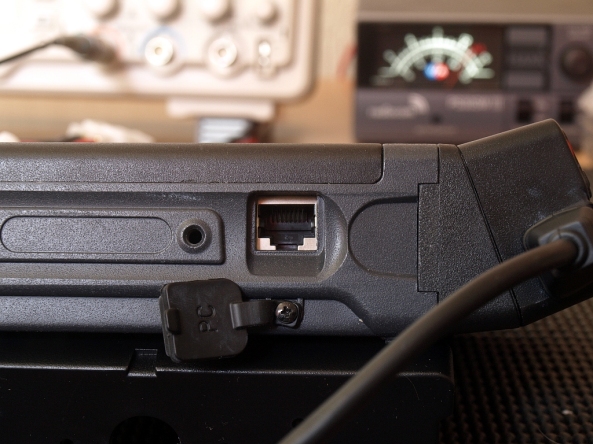 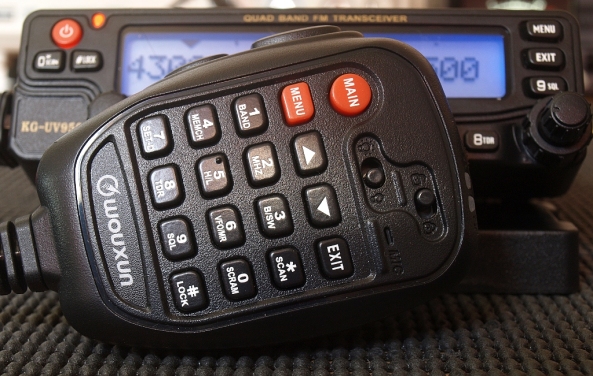 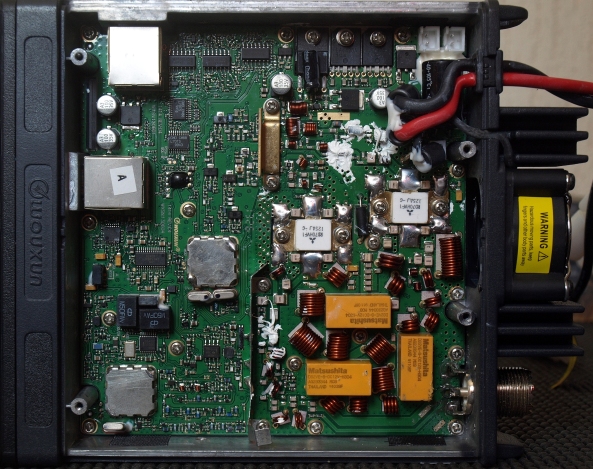 As you can see the build quality of the Wouxun is fine, just don’t get fooled by cooling paste and other sticky stuff used to keep various components in place and coils in shape.

Killing a rumor
One of the rumors was that any band can be assigned to any VFO. Because this information came from a normally very reliable source, I felt comfortable posting this a while ago. This proves NOT to be true however; 6/10 meters can only be accessed from VFO A. Now you know why I am very reluctant to post rumors. I hate it when this happens.

Microphone
I really like the microphone. It has been very well designed, feels just right and offers all the functionality you need – and more. Not visible in this picture are a speaker at the back and an extra volume control on top. This makes adjusting the volume much easier and precise. At the left you will find PTT and a programmable side key (default: monitor). A lock switch and a backlight switch are welcome additions too.

Frequency Range
The frequency range of this review model is exactly as described below, so the radio indeed covers the Citizens Band. Official versions will be limited to amateur bands, which in turn will depend on the country where the radio is sold. There are no jumpers or anything else on the PCB to make changes, you need special software to do that. This software won’t be in the box, nor will it be sold separately. 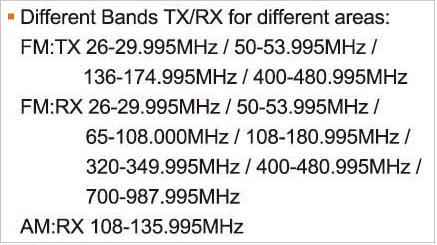 RX Audio
RX audio sounds fine at first, but there is a catch. Just like the KG-UV920 series adjusting the volume is done with rotary encoders. Nothing wrong with that, but the steps are coarse. Volume at 1 is slightly on the loud side but still acceptable for indoor use, but when setting the volume at 2 the level becomes uncomfortably high already. With the volume at 3 the first hint of distortion shows up, and hiss and noise start to become annoying. Setting the volume higher than 5 results in unacceptable distortion. And there are 16 steps in total…

The audible results were such that I decided to measure the difference in audio output between the various steps. I never felt the urge to do that before, but I wanted to make sure my ears didn’t deceive me. With an audio generator plugged into an extra transmitter and the Atten ADS 1102CAL connected to the Wouxun audio output I was good to go.

Just for the fun of it: volume halfway (8) deliverers 3.64 Volts Vpp. Sine wave is now hopelessly deformed, clearly a result of clipping, and on its way to change into a square wave. In reality you’d run from your shack in total despair now, and we’re just halfway the volume scale. I left the rest of the settings for what they were. You get the point.

When you switch from the internal speakers to the speaker/microphone this problem is less prominent or absent thanks to the extra conventional volume pot on top of the microphone.

TX Audio
No complaints. There’s a bit more emphasis on mid-tones than most other transceivers, but nothing major.

Power Output
When starting measurements I ran into a bit of a mystery. Power output on VHF and UHF is well described in the specs, but output on 10 meters and 6 meters is not. I expected the maximum output to be 50 Watts or so, but I couldn’t be more wrong. To be absolutely sure I checked the numbers twice, each time with different test equipment. I paid a bit more attention to the 26-30 MHz range, just because it’s there. Measurements in Watts.

Power output on 11-10 meters is disappointing to say the least, and on 6 meters I expected a bit more too. On many frequencies there is no difference between High, Mid1 and Mid 2. Power output on 2 meters and 70 centimeters is well within the norm, but lower than the factory specs.

Unfortunately the radio lacks 8.33 KHz channel spacing, which is needed in Europe. Increasing air traffic congestion has led to narrow-band 8.33 kHz channels in the ICAO European region; all aircraft flying above 19,500 feet are required to have communication equipment for this channel spacing. Outside of Europe 8.33 kHz channels are permitted in many countries, but not widely used yet.

Apart from real cross-band functionality, the radio can also act as a transverter (one way repeat). This came in really handy in my ‘Faraday Cage’ home. If that was not enough, you can construct your own repeater system by linking two KG-UV950P’s together. Just interconnect the two RJ-45 connectors at the left to get that to work.

Scrambler
A scrambler system is standard in this radio, and you can choose 8 different varieties of voice inversion. The garbled audio such a system produces will sound very familiar if you ever spend time on the HF bands and tuned into a USB signal while still in LSB mode.

Receiver quality
The receiver is sensitive enough to pick up even the weakest signal. Measuring sensitivity is becoming a bit boring, because all modern radios perform about the same. More interesting is the front end and its capability to keep unwanted signals out of the equation. Again Wouxun did something most other radios can’t: this radio survives most problems you throw at it, just like their dual-band KG-UV920P. I wished my Kenwood TMV-71 (the crappiest one I own) was half as good!

Harmonic suppression
This part is well under control, it’s actually better than ever. Most harmonics aren’t visible or below the noise floor of the analyzer. Only on 70 cm there is a small visible peak, but hardly interesting. 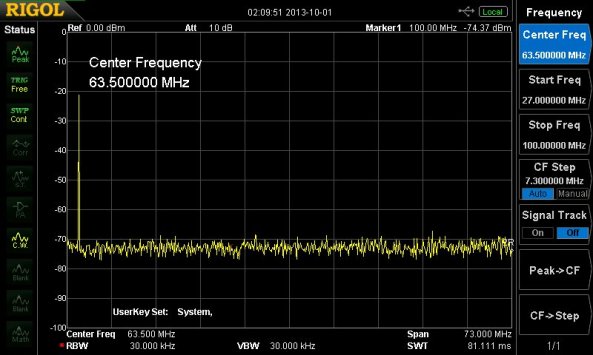 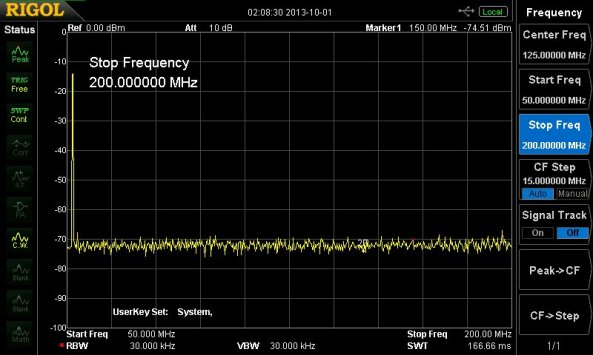 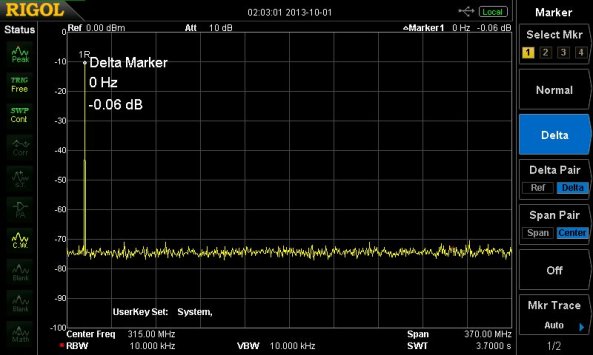 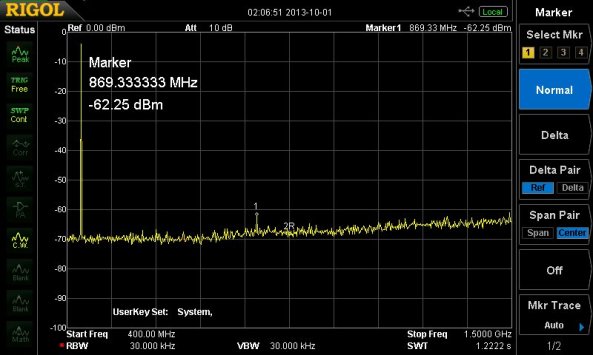 Compared to the Yaesu FT-8900R
I would love to give Wouxun some slack, but Yaesu doesn’t need to worry yet: the FT-8900R is way more refined. Admirable as the KG-UV950P is as Wouxun’s first attempt to make a quad-band transceiver, it is obvious that some things need immediate attention.

The volume issue bothered me the most. How difficult can it be to make smaller steps? To be honest I’d be happy to see conventional pots here instead of rotary encoders; nobody ever had a problem with those.

The disappointing power output on some bands, especially on 10 meters, needs to be sorted out. This might just be an issue with this sample; I will have that checked as soon as another sample becomes available.

Would I buy one? Yes, assuming that these problems get fixed. The price here in NL is 349 euros, while a Yaesu FT-8900R sets me back 499 euros. That’s a big price gap which makes the Wouxun potentially very attractive. I’ll have to be patient.

Many thanks to K-PO, who sent me this radio. I couldn’t do this without their help!