The battery didn’t charge. Even after being in the charger all night the LED still glowed red. Yesterday I already noticed that the behavior of the LED seemed erratic. Sometimes it glowed red, sometimes orange, sometimes it flashed. Something was clearly wrong.

Defective charger
From the moment I unpacked the UV-82 the flimsy construction of the drop-in charger stood out. It’s thin, small, light and looks as if it could topple over any second. That first impression proved to be not far from the truth.

I opened up the charger to see if I could spot a problem. I couldn’t test the chip, but something caught my eye: there’s no hard wired connection between the contacts and the PCB. Instead this Baofeng charger relies on two large copper surfaces and contacts pressing down on them. If for some reason the connection between the two fails, the battery won’t charge properly – or not at all. Just a bit of remaining lacquer, not uncommon on a PCB, would spell trouble.

The fix
The charging contacts act like springs and the screws holding top and bottom together are horribly weak, so open up the charger while slightly squeezing top and bottom. You can let go after you removed all 4 screws.

Take a bit of abrasive material (or a sharp screwdriver) and make slight scratches in the copper material. Do the same with the top of the three contacts. Re-assemble the charger when done. Be gentle on the screws, don’t tighten them too much. The construction is such that you probably can do this only once. If re-assembly fails you’ll have to replace all 4 screws with new ones with a slightly larger diameter. 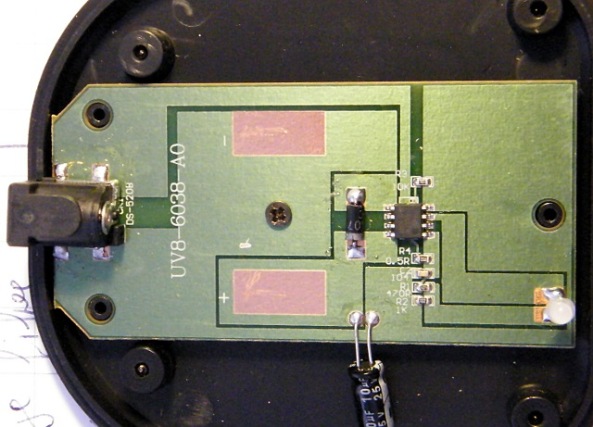 The erratic behavior didn’t resurface so far, and the battery appears to charge normally.