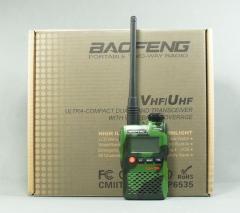 to be able to see me. I want to be invisible. Every time I’m driving my car for example, holding a microphone or some hand-held, people slam on their brakes. I can see the wives yell “Slow down, it might be police!” to their husbands. Funny, sure, but I want this to stop.

Let’s start with camouflage. Not exactly the same as invisibility, but close. Typing ‘Baofeng Camouflage’ into the search box was enough to get zillions of hits. And yes, I bought one a while ago. It was a Baofeng UV-3R Mark II, that little Smurf HT capable of transmitting on numerous harmonic frequencies you don’t want it to. The ‘camo’ looks cheap, very cheap, like it was dumped by Toys “R” Us for 5 bucks.

I had high hopes, but the UV-3R Camouflage didn’t help at all. As soon as I left the house, people waved at me, saying “Hi Hans!” Darn. What else to look for?

Then it suddenly hit me: Sauron’s ring! Although forged in Middle Earth and supposedly destroyed by a Hobbit, I figured that Chinese merchants invaded that part of the globe too and reverse engineered the ring. I was right. Within a week ‘The

One Ring’ (now copied millions of times) arrived. Time to put it to the test. I dressed up for outdoor life, grabbed my camouflaged UV-3R and put the ring on my finger.

I made it to the local park without being noticed, but once there people started to chat with me like they always do. Darn again! I’m now out of ideas. Maybe Harry Potter’s invisibility cloak would do the trick, but I doubt I can get hold of that one. I might as well face it: I’ve been scammed.

12 comments on “I have been scammed!”